Hannah Bethel will be coming to The Calumet Theatre stage on October 22nd with the show starting at 7:00 PM! Chad Borgen will be opening up the evening with just himself and his guitar. This show will be general admission and tickets are $25.00! 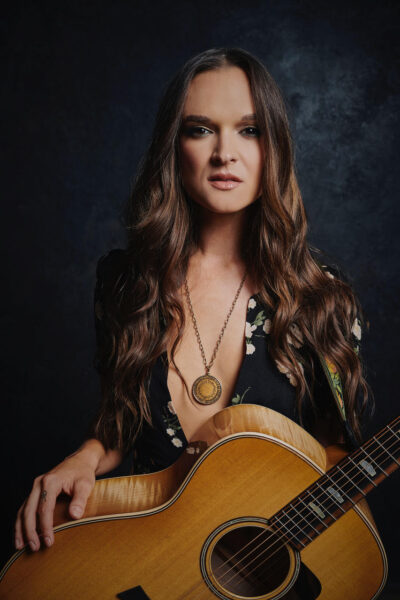 There will be a social in the ballroom starting at 6:00 PM. Beer and wine will be available for purchase along with some snacks. Come sit and sip on some beverages while preparing for a talent-filled evening!
Storytelling permeates throughout popular music, but few songwriters can stop you in your tracks and transport you to a specific moment in time, making you feel love, heartbreak, and nostalgia quite like Hannah Bethel. Her ability to tap into deeply personal songwriting was the turning point for her, and beginning in 2018, provided a trilogy of breakthrough songs, including “Train,” “Rhinestone Rodeo,” and the emotionally riveting “The House Is on Fire,” the latter of which won top honors in the Americana category of the 2019 International Songwriting Competition. Blurring the lines between Americana, country, folk, rock and pop, her artistry reflects who she is: a fiercely independent, wild, and untamed spirit.
It was Bethel’s destiny to become a performer and songwriter. Born in Fond du Lac, Wisconsin, and raised in Houghton, Michigan, she studied dance as a child, and later drew musical influences from Seventies rock and country music artists Tom Petty, The Eagles, Fleetwood Mac, and Willie Nelson. Driven to carve out her own musical style, she took up the guitar, and began honing her own talents as a teenaged singer-songwriter traveling the upper Midwest performing at fairs, bars, talent shows, coffee houses, shopping malls and country western shows. She self-released her first record at age 17, and the following year she moved to Nashville where she released three more albums over the span of a few years.
Bethel’s stellar 2022 EP, ‘Until the Sun Comes Back Around,’ leads you through the culmination of the past few years of her life, and the surrender to her own truth. This watershed period of creativity provided the fire power behind the EP’s critically acclaimed songs, “Bad News Baby,” “Someone’s Woman,” and “On the Way Down.”
Bethel has received accolades from Maverick, The Washington Post, Billboard, Holler Country, Taste of Country, Country Music People, and others. Her music has garnered airplay on indie rock, Americana, and country radio outlets across the globe, including WRLT Lightning 100, WMOT Roots Radio and WSM. Bethel’s videos have been featured on CMT, Ditty TV, and The Country Network. She recently took home the award for “Best Female Vocalist” at the 2022 Appalachian Arts &amp; Entertainment Awards.

Visit her website at hannahbethel.com to learn more about her journey!